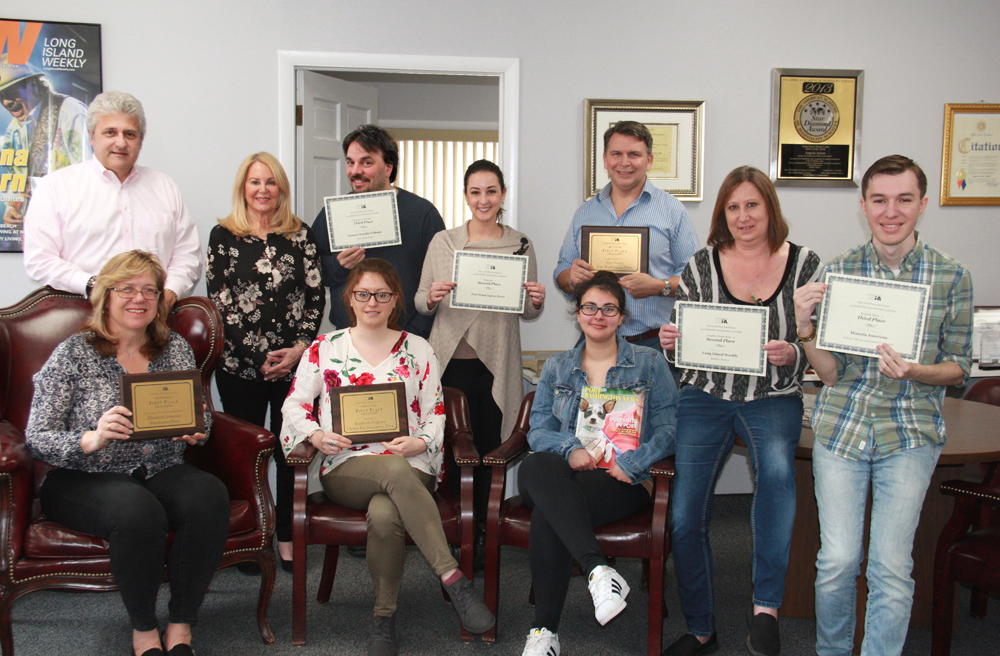 The New York Press Association (NYPA) held its annual spring conference in Albany this past weekend and presented 546 prestigious awards to members of the journalism community. Competing with other community newspapers across the state, Anton Media Group earned 12 awards for editorial, design and advertising excellence.

Former managing editor Betsy Abraham took third place for Best News Story in Division 1 for her Westbury Times article “Pets4Luv Hunts For New Home.” Judges said, “Pets4Luv story is very well written and certainly makes us feel the pressures that the shelter, volunteers and critters, had to go through.”

Editor Anthony Murray and ace reporter Kimberly Donahue investigated the issue of aggressive panhandling at the Mineola train station and published a three-part series last June in Mineola American—“Homelessness In Mineola,” “Enforcement At The Train Station,” and “Finding The Solution.” The judges offered these positive and constructive remarks for the third place winner of Best Feature Story, Division 1: “Three-part series on homelessness, including panhandling at train station; the village board’s proposal to curb the problem; and options in the community to help the homeless. The writers present the problem well and get voices of government and social service networks into the conversation, but would have been a stronger entry by including the voice of a homeless person.”

In the category of Best Editorials, Division 1, web editor Kimberly Dijkstra earned first place for her editorials titled “Arms for Teachers,” “Kenneling Children Is Un-American” and “Suppression Depression.” The judges said, “Incredibly strong starts that kept me going throughout. Hit me in the face with the strong argument right away.”

Judges from the Wisconsin Press Association offered many kind comments about the entries. Judges said, “Very well-done series on an unusual instance of NIMBY. Makes me want to know what happened next,” about Elizabeth Johnson’s medical marijuana dispensary series under the management of former editor-in-chief Steve Mosco. The Manhasset Press articles—“Medical Marijuana Company Seeks Manhasset Storefront,” “Demonstration Set Against Medical Marijuana Dispensary,” “Town Sets Hearing Date For Zoning Legislation,” “No Toking Over the Town Line” by Frank Rizzo, and “In North Hempstead, A No-Pot Zone” by Frank Rizzo—took first place for Coverage of Local Government, Division 1.

Following a recent win at Fair Media Council’s FOLIO awards, Port Washington News Magazine earned second place at NYPA. Judges had this to say about the company-wide collaborative effort helmed by executive editor Jennifer Fauci and art director Alex Nuñez: “You never get a second chance to make a first impression. You impressed with your gate fold cover and consistency throughout your entry. A lot of attention to detail and effort. Congratulations.”

Nuñez contributed his own original artwork to the magazine’s feature on Bay Walk Park. The watercolor earned first place in for Best Graphic Illustration, Division 1, and these remarks from the judges: “I like the original art rendering of the venue used in this capacity because it gives a real life representation of the location, so you get an overview of where you are and what the area has to offer. Plus it’s great artwork.”

Long Island Weekly lead designer Barbara Barnett took second place in the Division 2 Graphic Illustration category for her eye-catching “Diner Drinks Decoded.” The judges said, “I love the clean and colorful magazine style use of the art in this section. Combined with the content it creates an easy to read article.”

Finally, senior artist Caren Donatelli took home three awards. Donatelli earned first place for Large Space Ad, Division 1, for an Umanoff Boyer Agency ad. Judges said, “Nice layout and use of space. Clever use of imagery.” She earned an honorable mention in the same category for a Cat Diggity Dog ad, with these comments: “Adorable! Attractive, easy to read and attention grabbing! Great use of the entire space.” And she was awarded third place for Best Advertising Campaign, Division 1, for a series of ads for Guttermans, prompting the judges to say, “The text is positioned well within the images and the overall ad campaign is clean, clear and cohesive.”